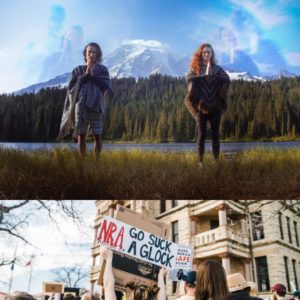 Here is a question I’ve been wrestling with lately:  How do those of us who are trying to evolve from a spiritual perspective engage effectively in today’s darkly political world?

I was taught that you don’t fight hate with hate. As one mentor drilled into me ‘the energy of againstness doesn’t bring us closer to a world filled with love’. And yet, I (like many liberals) pretty much slept through the Obama years because someone I trusted had the wheel — I can’t afford to stay asleep anymore — not in today’s world. So…where is the line between effective engagement and spirituality? How can we be of service without getting swept up in the tsunami of ‘againstness’ or ‘hate’?

I think a small part of the answer lies in embracing our innate power. What do I mean by this? Well…

As I’ve admitted before, I’ve always been both a spiritual cynic and a full on wu wu convert.  So when I first heard myself referred to as a  ‘light worker’ I did a spit-take with my Chai.  Then laughed my ass off.

But here’s the thing— without getting on a rant about the abysmal state of the world— let’s all agree that these are chaotic, unsettling and terrifying times.  And if there is such a thing as a ‘light worker’, well then folks, I hate to break it to you, but we are them. To quote a friend’s song: We are the ones we’ve been waiting for.  And we are needed now more than ever.

If I were reading this, my reaction at this point would be exhaustion. ‘What? You mean we need to do even more work? Shouldn’t we all get a momentary ‘time out’? Take a collective nap?  You know what, stop the world, I want to get off!’

If this was your reaction, then you are clearly misreading this post as some kind of call to action.  Let me assure you that I’m way too lazy and self-involved to call anyone to anything. I would never encourage you to commit to anything that I’m struggling to commit to myself. (The only reason I made it to the women’s marches and  gun march was because I had fired-up friends who pushed me and made arrangements).  But I am saying that spiritual seekers can’t afford to stay asleep or willfully ignorant to the epic social wars happening all around us.

Recently, a spiritual teacher (whom I admire greatly) told me about how she and her husband spent the first few years of their relationship going further and further into the ether.  They followed a strict vegetarian diet, renounced the media and wore only organic cotton; mostly in the color white.  And she was happy in that bubble.  But she freely admits that it was, indeed, a bubble.

Ultimately we both agreed that our generation of ‘light workers’ (see what I did there?) are not meant to sit atop an isolated mountain, contemplating consciousness, sipping air and staying safely above the fray.  Our job is to bring as many palatable learnings as possible back down to earth and into a damaged society which obviously needs our wisdom.  Otherwise, we’re all just on some self-involved, psychedelic mastubatory trip…

‘Ok.  Fine. I’m a ‘light worker’. What now? Where to start?’ Oh, the overwhelming nature of that question!

I, like many, am simply not sure what kinds of actions can really affect change. But I’m thinking that maybe, just maybe, if we all take small, incremental actions whenever we are called to do so, the impact will be great over time…?

The actions we take can be as small as giving up a seat to an elderly person, or volunteering with a friend at a shelter once in a while. Donating five bucks to Planned Parenthood, or some other cause we believe in. Or maybe it’s simply not engaging with a difficult family member who’s baiting us over social media?  Taking the high road, but doing it from an informed, passionate yet loving place?

At the end of the day,  it just seems that we need to commit to showing up every time we’re called and capable.  And, at the very minimum, we VOTE!!  But more so,  kind of like a superhero in training, we embrace our ‘light-bearer’ status so that we are ready to bring the light into every room, every situation and every day.

What do you guys think?